Russian diplomat asks OPCW to tell the truth & NOT repeat past false allegations of Syrian government’s use of chemical weapons. 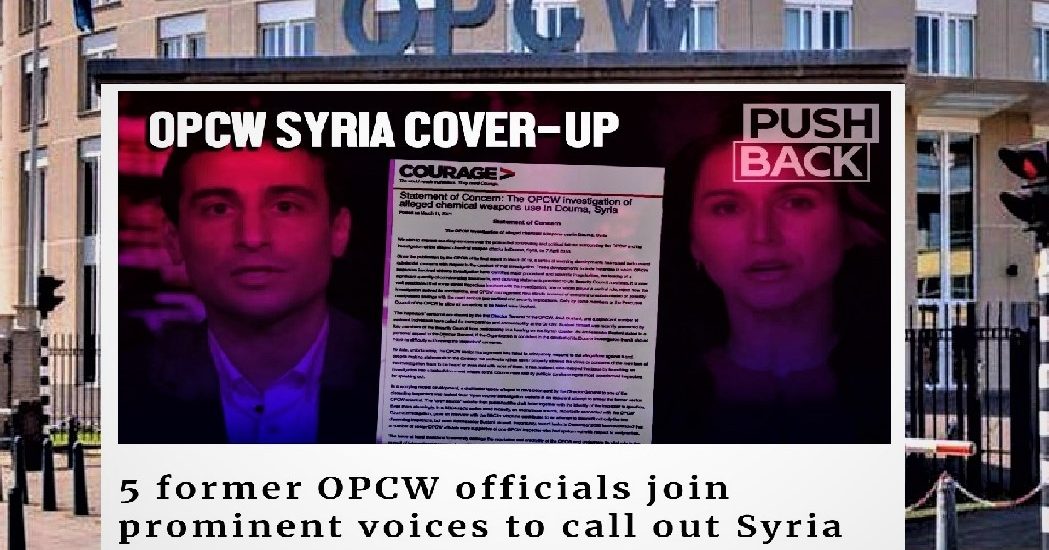 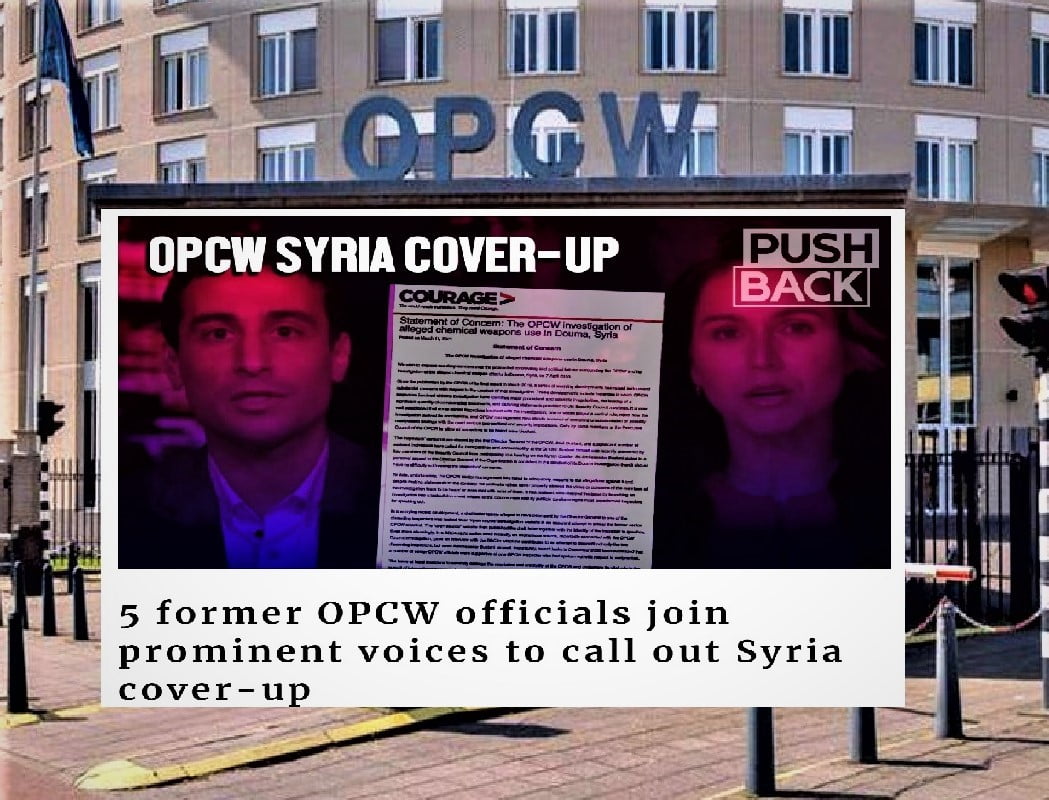 A senior Russian diplomat warned against attempts to incriminate the  Syrian government and Arab Syrian Army troops at the OPCW over alleged chemical weapons use in the war-ravaged country.

A senior Russian diplomat has warned that the Organization for the Prohibition of Chemical Weapons (OPCW) is likely repeat its allegations about chemical weapons use in Syria in order to implicate army troops and the government.

Russian First Deputy Permanent Representative to the UN Dmitry Polyanskiy told a UN Security Council session on Tuesday that even though independent experts corroboratively dismissed the previous report by the OPCW’s Investigation and Identification Team (IIT), the technical secretariat of the global chemical weapons watchdog still persists on turning a blind eye to criticism of the document.

That report claimed Syrian military planes and a helicopter had dropped sarin and chlorine bombs on the town of Lataminah in Syria’s western province of Hama back in March 2017.

“Apparently, the IIT will catch us once again by surprise and will publish yet another ‘pseudo investigation’ and anti-Syria results prior to the grand theatrical finale.”

The Russian diplomat went on to say that his Western counterparts “would rush to interpret that unscrupulous product as alleged proof of chemical warfare use by Damascus” and Syrian government forces. 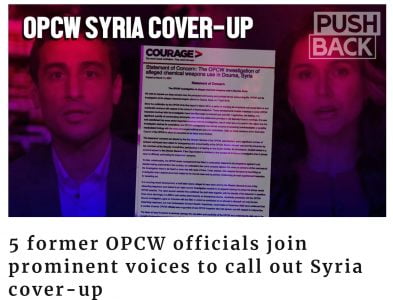 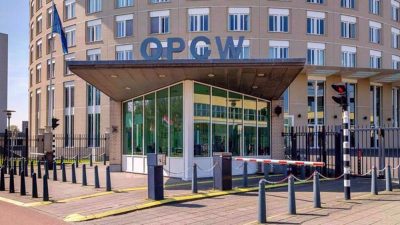 Retired US army colonel Lawrence Wilkerson says international organizations such as OPCW at times come under pressure from certain countries to “alter the facts.”

Polyanskiy sharply criticized the OPCW’s so-called investigators over their attempts to incriminate Syria without providing any conclusive and unequivocal evidence, stating that their methods of besmirching have stayed pretty much the same.

The Russian diplomat also warned against the French-Western draft decision, which falsely alleges Damascus government’s non-compliance with the Chemical Weapons Convention and demands suspension of Syria’s rights in the OPCW.

“I urge you to give it a thought. If Syria can no longer take part in the OPCW decision-making, what is the point then for Damascus to keep cooperating with the Organization? What is the ultimate goal, after all? Is it to “crush” Syria as was the case with Iraq … or is it to make sure that nobody on the Syrian soil has any chemical weapons?”

“If Syria’s opponents attain their goals, we will be living through difficult times, The OPCW and the international community will neither get cooperation in this case nor in any other area,” the Russian diplomat noted.

Syria: Do not let international organizations become US tools

Meanwhile, Syria’s Permanent Representative to the United Nations Bassam Sabbagh called on the international community not to allow the OPCW to become a tool for the United States and its allies to pressure other world states.

“The French-Western draft resolution once again confirms the hostility of certain countries against Syria. Syria strongly condemns failed attempts of some countries to spread lies and accusations about Syria’s non-compliance with the Chemical Weapons Convention,” he said.

Sabbagh went on to say that the draft resolution, which is to be presented at the 25th meeting of the Organization for the Prohibition of Chemical Weapons later this month, relies on incorrect and unprofessional inferences drawn by the organization’s so-called Investigation and Identification Team.

“Syria condemns the use of chemical weapons under any circumstance and has not used such munitions at all. Damascus is seriously and transparently cooperating with the technical secretariat of the OPCW; and completely destroyed its chemical weapons depots and manufacturing sites as a result of such cooperation,” the Syrian diplomat said.

The Russian Defense Ministry says militants in Syria’s northwestern province of Idlib are planning to stage a chemical attack there and blame it on the Syrian government. Russia has repeatedly criticized the OPCW for ignoring the information about toxic provocations in Syria, saying the body is biased against the Damascus government.

Moscow and Damascus have on many occasions said members of the so-called White Helmets civil defense group stage gas attacks in a bid to falsely incriminate Syrian government forces and fabricate pretexts for military strikes by the US-led military coalition. The group claims to be a humanitarian NGO but has long been accused of collaborating with anti-Damascus militants.

On April 14, 2018, the US, Britain and France carried out a string of airstrikes against Syria over a suspected chemical weapons attack on the city of Douma, located about 10 kilometers northeast of the capital Damascus. Washington and its allies blamed Damascus for the Douma attack, an allegation rejected by Russian and Syrian governments. 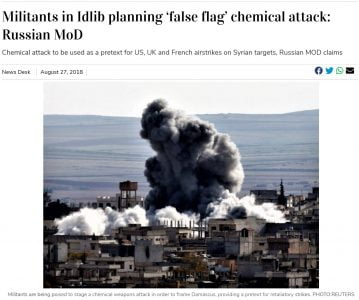 Russia called on the global chemical weapons agency to conduct an impartial investigation into the alleged chemical attack in the Syrian city of Douma near the capital Damascus on April 7, 2018.

Western governments and their allies have always rushed to point the finger at Damascus anytime allegations of chemical attack surface, long before they are substantiated.

Noteworthy is the fact that Syria surrendered its stockpile of chemical weapons in 2014 to a joint mission led by the United States and the OPCW, which oversaw the destruction of the collected stockpiles.