Is Ukraine Lying About its Dead Soldiers Numbers? What Else Are We Being Lied About? Watch George Gallaway’s interview with Scott Ritter. (Video) 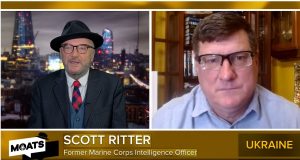 Ritter, who runs his own talk show at @scottrittershow talks about European Union President UrsulaVonDerLeyen slipping up about Ukraine losing 100,000 soldiers to date and that the true number is closer to a quarter of a million. He also talks about who is truly winning the war in Ukraine as well as MI6 false and Purposed Disinformation in Moscow about Putin being ill, sick, unpopular, etc.

Watch the powerful interview below.