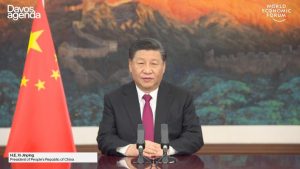 Chinese President Xi Jinping on Monday (25 January) in Davos called for a return to multilateralism, warning against a “new Cold War”, and urged global unity in the face of the COVID-19 pandemic.

Speaking at the virtual opening of this year’s World Economic Forum (WEF), Xi sought to position China as a key player in a new multilateral world order as the United States remains crippled by the pandemic.

“To build small cliques or start a new Cold War, to reject, threaten or intimidate others… will only push the world into division,” Xi said, adding that confrontation would lead to a “dead end”.

“Zero-sum game or winner-takes-all is not the philosophy of the Chinese people,” Xi added.

Xi’s speech had been widely anticipated for the tone it would set for relations between the world’s two biggest economies over the next four years.

Although not addressing Washington specifically, his remarks could be seen as a subtle criticism of US-China tensions.

They were his first remarks to an international audience since the inauguration of US President Joe Biden, who had emphasised the need for Western democracies to work together to confront China.

Throughout his speech, Xi repeatedly returned to the importance of international cooperation, except on issues like human rights, that he said China deems “internal affairs”.

“Each country is unique with its own history, culture and social system, and none is superior to the other,” Xi said, warning against imposing a “hierarchy on human civilization” or forcing one’s own systems onto others.

“We should stay committed to international law and international rules, instead of seeking one’s own supremacy,” Xi said in a swipe at Western critics who have repeatedly criticised the Chinese crackdown on Hong Kong activists and the use of forced labour, particularly among the Uighur Muslim minority.

Xi specifically opposed the idea of imposing sanctions or seeking to “create isolation” and warned that the pandemic should not be allowed to accelerate “decoupling” or the re-routing of supply chains.

He also stressed the importance of strengthening macroeconomic policies to combat the pandemic-induced global economic downturn.

“We must build an open world economy, firmly safeguard the multilateral trade system, and refrain from making discriminatory and exclusive standards, rules and systems, as well as high walls that separate trade, investment, and technology,” Xi said.

Xi last addressed Davos in 2017, presenting himself as the champion of free trade on the eve of former President Donald Trump’s inauguration.

China’s president also laid out a four-step approach to ensure the world emerges stronger from the COVID-19 crisis.

He refrained from the triumphal tone of some of his domestic addresses in recent years and did not repeat his claims from a speech in September where he said that China’s pandemic response demonstrated the “superiority” of China’s political system.

Instead, Xi said a global recovery plan would include “macroeconomic policy coordination,” the avoidance of “arrogance, prejudice and hatred” in favour of “peaceful coexistence,” the reduction of global inequality, and the strengthening of global institutions on issues like public health and climate change.

“We hope these efforts will bring more cooperation opportunities to other countries and give further impetus to global economic recovery and growth,” he said.

Governments worldwide must do more to work together and put the global economy back on track as recovery from the COVID-19 pandemic is “rather shaky” and the outlook remains uncertain, said Xi.

“The pandemic is far from over and the recent resurgence in COVID cases reminds us that we must carry on the fight,” Xi said. “There is no doubt that humanity will prevail over the virus and emerge even stronger from this disaster.”

On climate, Xi reiterated China’s ambitious climate pledges to slash carbon emissions by 65% by 2030 and achieve carbon neutrality by 2060 – both significant commitments as China emits a quarter of the world’s greenhouse gases.

“Meeting these targets will require tremendous hard work from China. But we believe that when the interests of the entire humanity are at stake, China must step forward, take action and get the job done,” he said.

“We need to deliver on the Paris Agreement on climate change and promote green development,” he added.

“We need to give continued priority to development, implement the Sustainable Development Goals, and make sure that all countries, especially developing ones, share in the fruits of global development,” Xi said.